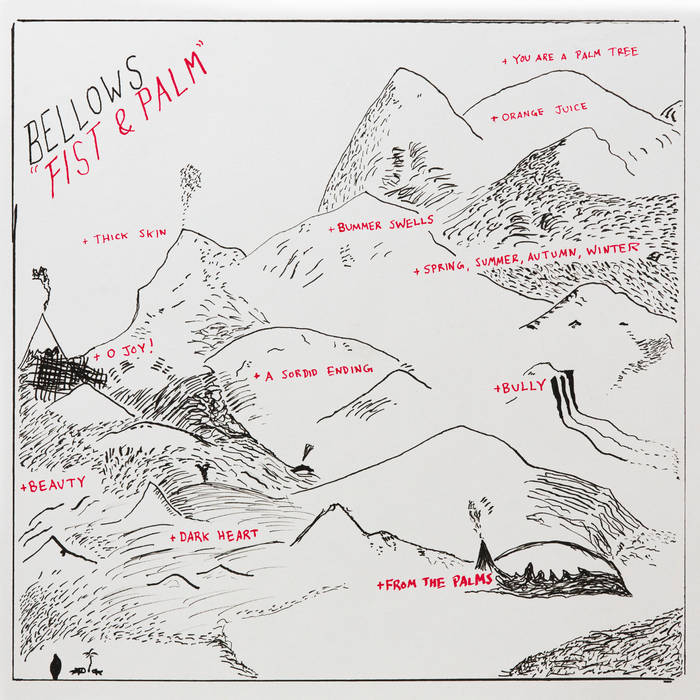 Louis Holding Couldn't be happier to pick this up on vinyl! Oliver's music is really special and this is one of my favourite albums of all time :) Favorite track: Thick Skin.

Svetlana Zwetkof It's so earnest and paints the clearest picture but I know it's not my story & that's what I love about it Favorite track: You Are A Palm Tree.

will i reach you

"Fist & Palm", the third full-length album by Bellows, documents the dissolving of a friendship. The album's narrative trajectory is an anti-narrative, beginning and ending in the same place: in the backyard of a shared house, on the night of a petty argument. The circularity of the album's timeline underlines an overarching theme of the record -- the realization that when the satisfaction of a real resolution is denied, beauty and meaning can be found only in its pursuit. As I pursue happiness and the discovery of beauty, I find that satisfaction exists for me only in a perpetual sense of 'going', of always moving forward, and accepting that although some goals can never be achieved, and some failures are guaranteed, there is "beauty in the certainty of never reaching what I'm after."

"Fist & Palm" was written and recorded by Oliver Kalb over the course of two writing periods. The first was a month-long song-a-day project in October 2014, from which 7 of the 31 songs written for the project were kept for the final album, and a certain sonic template was mapped out for how the record would develop the sound of Bellows as a recording project. After a heavy year of touring throughout 2015, the album was completed between October 2015 and January 2016. James Wilcox (JCW) produced, sequenced and sampled drums on several songs, Felix Walworth (Told Slant) recorded live drums throughout the record, Gabrielle Smith (Ó) contributed violin and choral arrangements, and Jack Greenleaf (Sharpless) mixed the record and added final arrangements.