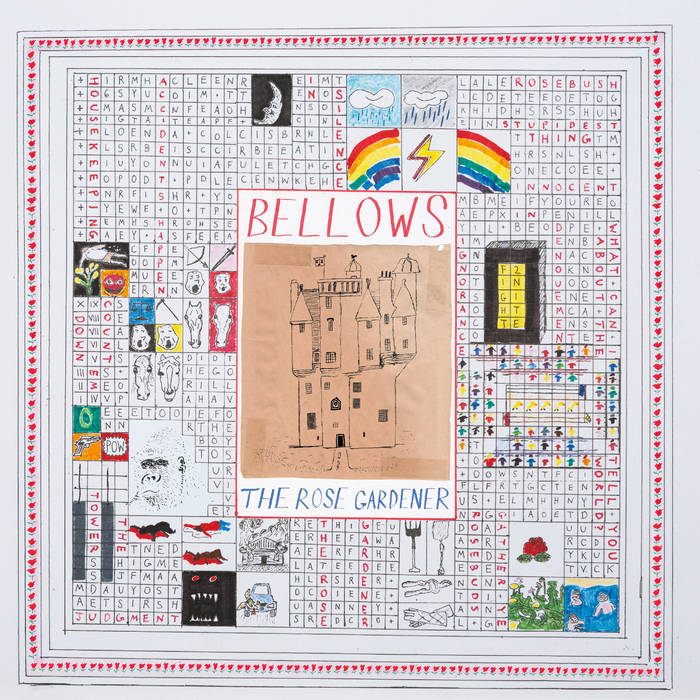 Louis Holding oH YES!!! 2019 is going to be a good year Favorite track: What Can I Tell You About the World?.

The Rose Gardener" is the fourth album by Bellows. It was written and recorded in a home studio in Woodstock, NY in early 2018.

A lot of the album is about the idea of judgment: why we’re compelled to judge each other, hate our peers, bring competitiveness to art-making, compare ourselves to others, destroy beautiful things for an ego-boost or a feeling of political purity. The album was written in a period of intense frustration with the world of music and the dumb infighting that dominates it. Especially after the election in 2016, I found myself more and more demoralized with the state of the world. As America sunk deeply into quasi-fascism and normalized day-to-day violence, I began to wonder why our counter-cultures were paralyzed and unable to respond, so wrapped up in the narcissism of small differences that they forgot to fight the actual bad guys.

Somehow the idea of judgment felt crucial to understanding the moment we’re living in. Everyone in society the judge, the rockstar, the lead of his own private TV show, privately declaring judgment and dismissal to anyone standing in his way. I began to feel the loneliness of this moment in history. That although we’re supposedly more connected than we’ve ever been, we’ve become further and further factionalized until each person stands completely alone, unable to forge real connections or bonds, isolated within the internet booth of judgment and narcissistic self-righteousness.

I think the loneliness I see in this moment became the metaphor of The Rose Gardener — a gardener trying to tend to a single rosebush in the dead of winter. I imagined this character and his practice of tending to a rose that seems destined to perish in ice, who recognizes the futility of the work but nevertheless goes out every day to tend to the dying plant. The loneliness of this character felt akin to the feeling of trying to make art in such a loaded and violent moment. How could one possibly try to speak softly in a world filled with such deafening shouting from all sides? But rather than giving up gardening, the Rose Gardener persists — he sticks his hands into the thorny rose bush and tries to see through to what might still lie on the other side: real life.

Oliver Kalb wrote all the music and lyrics, and worked with several musical collaborators including Jonnie Baker (Florist), Ian Cory (Lamniformes, Sharpless), James Wilcox, Henry Crawford, Gabrielle Smith & Felix Walworth. The album was mixed by Jack Greenleaf, Gabrielle Smith & Oliver Kalb. It was mastered by Paul Gold. All artwork by Oliver Kalb. So much time and effort was put in by Richard Gin to organize and help fashion the art to be presentable, thank you Richard!